Payment of $2,500 at Center of Latest Dana Loesch Pissing Match 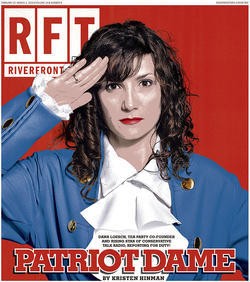 There's some interesting bickering underway in the G.O.P. primary race for Missouri's 3rd Congressional District. And contrary to what you might expect, it doesn't involve the candidates hurling insults at each other -- at least not directly.

The controversy surrounds St. Louis Tea Party co-founder Dana Loesch who's used her bully pulpit at 97.1 FM -- as well as her Facebook and Twitter accounts -- to denounce Republican candidate (and fellow Tea Party cohort) John Wayne Tucker while at the same time throwing her support to G.O.P. candidate Ed Martin.

But could Loesch's stance be financially motivated?

Shriver notes that the check was made out on February 20 of this year -- just a couple weeks before Martin made one of several appearances on Loesch's talk show. Tucker, meanwhile, has never received a similar invite.

Via Twitter, Loesch implies that Tucker has tried to browbeat her into having him on her show and that she won't let candidates turn her program into an "electioneering" platform. (Apparently that's not the case, though, for Ed Martin.)

Tucker has replied (also via Twitter) that he's never requested to be on her show.

EDITOR'S NOTE: For Chris Loesch's response to this kerfuffle, as well as information about how blogger Shriver appears to have misstated Shock City Studio's ownership, see our follow-up post here.