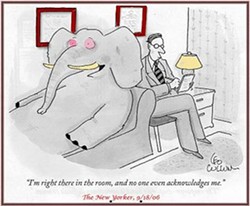 The St. Louis Zoo yesterday announced that one of its Asian elephants, Ellie, miscarried her 9-month-old fetus this week.

Elephant pregnancies generally last 22 months. Zoo officials said they were not all that surprised by the miscarriage after recent tests showed a drop in the 38-year-old Ellie's hormone levels. Ellie's 14-year-old daughter, Rani, is also pregnant from the same bull, Raja.

The miscarriage drew fresh complaints from In Defense of Animals, a California group that has named the St. Louis Zoo in its "Hall of Shame" for the treatment and condition of its elephants -- with at least one of the animals carrying herpes.

Yesterday a spokeswoman for In Defense of Animals told the Post-Dispatch that a medical connection exists between herpes and miscarriages and cited numbers indicating that nearly 15 percent of Asian elephant pregnancies in U.S. zoos have resulted in still births.

The zoo maintains that miscarriages are common among all animals -- elephants, humans, etc.