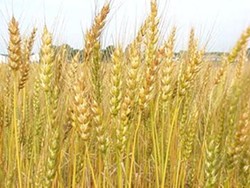 St. Louis-based Monsanto announced this week that it is teaming with German-based BASF to create a drought-resistant wheat.

The two biotech firms already partner together on similar seed strains for corn, soy, cotton and canola. The first of those products -- drought-resistant corn -- is scheduled to hit farms in 2012, pending regulatory approval.

Monsanto says the need for greater wheat supplies is likely to increase as developing countries such as China and India become more affluent and increasingly add bread to their traditional rice-based diets.