Clangclangclang!!!! The Loop's Gettin' a Trolley! 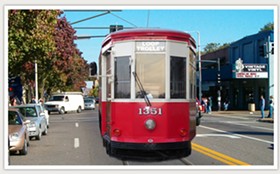 It's official: $24 million in federal funds have been secured for a trolley system connecting The Loop to Forest Park.

Joe Edwards, the ponytailed Pope of U. City, just told Charlie Brennan on KMOX that the trolley path will start on Delmar near the lions lion and tiger pair, run east to Debaliviere, then head south to Forest Park. Only some of the fixed-track trolley line with have power cables overhead.

According to Congressman Russ Carnahan's office, there's a press conference going on as we write this. Details to follow.