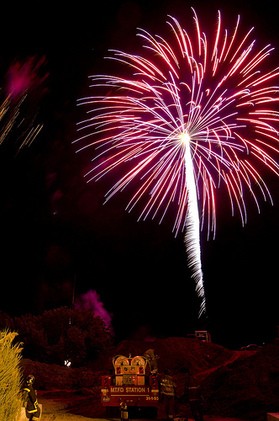 For their dose of Fourth of July fireworks this year, some poor suckers piled up on the riverfront at Fair St. Louis. Some braver souls shot off cherry bombs in their backyards and alleys. But the residents of the Oakwood Housing Complex in Alton outdid them all.

On Monday night, Oakwood residents called the Alton police and fire departments to report a shooting, illegal fireworks and a fire in a Dumpster. When police and firefighters arrived, the good people of Oakwood attacked them with fireworks and bottle rockets. Hundreds of residents gathered to watch the friendly neighborhood fun.

Fireworks are illegal in the state of Illinois. The firefighters and police officers tried to retaliate with pepper balls. So far, there have been no arrests.

"Our firefighters got in there and started doing their thing, and out come the fireworks," Mark Harris, a deputy fire chief, told the Associated Press. "It does appear we were lured in for that purpose. Helluva example for the kids," he added. "The guys don't get paid near enough to be shot at."