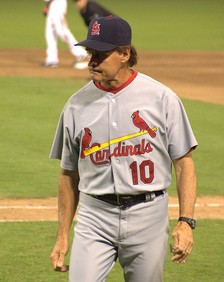 So, as we've reported earlier, Tuesday night was Tea Party night at Busch Stadium. The Cardinals were playing the Arizona Diamondbacks that night and the St. Louis Tea Party was there in force for a "buycott" in support of Arizona and its recent law to crack down on illegal immigrants.

As St. Tea Party founder Bill Hennessey told KSDK: "Part of the gate goes to the Arizona Diamondbacks and there are a lot of groups that are boycotting Arizona. We're "buy-cotting" Arizona."

But the biggest news of the night came when Cardinals skipper Tony La Russa expressed his views of the Tea Party and Arizona's immigration policy to KSDK.

Oh, and after issuing that statement La Russa and the Cardinals went on to trounce the Diamondbacks 8-0.