Albert Pujols: The Weight of Being The Mang 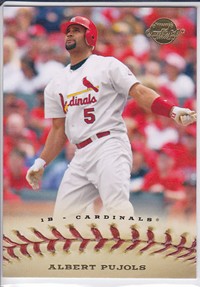 Another series, another bad loss trying to go for a sweep. It would be funny if it weren't so frustrating.
The deciding moment of the game yesterday was a telling one, a moment that for me summed up nearly everything that's been wrong with this season.

It was the bottom of the sixth inning, when Albert Pujols came to bat with the bases loaded and two outs. Blaine Boyer (remember him?), had gotten two quick outs in the inning, then Brendan Ryan singled on a little humpback liner to second base. Skip Scumaker singled to left field, and suddenly the Cards were in business.

Just one more batter and Albert could come up and do his Albert thing.
Felipe Lopez came to bat, worked the count full, and then started fouling off pitches. One, two, three, and four, fighting off deliveries and trying to just survive. Finally, on the tenth pitch, Boyer missed, and Lopez was on. He had won a tough battle to bring up the best hitter on the team with a chance to change the game. This was the 2005 NLCS again, when Jim Edmonds worked a tough walk off Brad Lidge just ahead of Pujols' moon shot over the train tracks that put the Cards up for good and set up the game six heartbreak. Sure, it wasn't quite as dramatic, being the sixth inning of a game in June, but still. A home run would have put the Cards up 5-4, and the second place hitter just worked a long walk. I can't be the only one who thought of '05.
So up comes Albert, Arizona manager A.J. Hinch went to Juan Gutierrez, and Pujols proceeded to hit a blast six foot to the left of Big Mac land to put the Cardinals up for good. It was the sort of moment you almost expect Albert to come through in, but I think we should all stop for a moment and once again just marvel at how Albert gets the job done seemingly every time there's a big situation.
Oh, wait.
Except he didn't. Albert didn't hit the home run there; he grounded out weakly to third base. Gutierrez threw him a crap slider well off the plate and Albert chased ball four to make the out.
I'm not one to read a whole lot of psychological reasoning into events on the field; broadcasters do enough of that without me adding to the chorus of crap. But in this case, I'll change my tune. You could almost see in that at-bat everything that's going on with Albert Pujols these days, as he fights the weight of being Albert Pujols.
Let's face it: the expectations for Albert are perfection. We expect him to get the job done every single time, and he expects the same. It's why fans and media types question what in the world is wrong with Pujols when he puts up a ~.950 OPS for half a season, and why I was honestly surprised when he didn't get the big hit in the bottom of the sixth yesterday.
So many of the moves the Cards have made the last couple season have all come with the reasoning of getting 'protection' for Albert. I won't go down that road again, of how ridiculous it is that all these perfectly intelligent baseball people are incapable of seeing the protection myth for what it is. That's just how things are.
But if ever there was a time since the days of the MV3 that Albert does, in fact, have that protection the team seems to so crave, it is now. Matt Holliday is still tearing the cover off the ball, Colby Rasmus has emerged as a huge power threat, and Ryan Ludwick isn't turning back into a pumpkin. There are real, honest-to-god hitters in the Cards' lineup now, enough that Albert isn't shouldering the load alone.

​It doesn't seem to matter, though. When Albert reached for that slider six inches (at least), out of the zone yesterday, he was trying to do it all himself, trying to win the game because he didn't think anyone else could win it. So instead of taking the pitch, taking the walk, and taking the one RBI with a chance for Holliday to be the hero, Albert grounded out weakly trying to do it himself.
I can't really blame him, of course; we've seen the last few seasons as Albert has become more and more of a man on an island in this offense. Scott Rolen got hurt and Jim Edmonds got old and Larry Walker retired, and Juan Encarnacion just couldn't fill those shoes. It has been, at times, Albert and the Seven Dwarfs, and big moments from the dwarves have been few and far between. Pujols has been the team's only real hope. The fact that's no longer true just doesn't seem to have quite gotten through to Albert yet.
There have been two hitters this past decade who have transcended above everyone else; Albert and Barry Bonds. I know Alex Rodriguez has the numbers, but he's never been feared in the same way, even when he was winning MVPs. Bonds and Pujols have, at times, seemed incapable of making an out when the big situation came up.
We all love to hate Bonds for his selfishness and arrogance, but I think those qualities may, in fact, have been the secret to his utter domination in the latter years of his career. I know, I know, the steroids were the main cause, but I think it's been overlooked how much Bonds was helped by an utter disregard for his opponents and his teammates.
Barry Bonds was arrogant enough to look down on opposing pitchers, and when they wouldn't pitch to him, he seemed to consider it proof of their weakness and cowardice. He was more concerned with his own success than that of his team, and never went outside himself to try and win the games himself. Albert is constantly fighting against being walked, it seems, because while a walk is good, he needs to do more, to be the man every time out. Paradoxically, Bonds' indifference was a big part of why he succeeded, and Pujols' humility and drive to win lead him to do too much.
Like I said, I don't really subscribe to much of the pop psychology that gets bandied about in baseball all the time, but I believe we can see it with Pujols. He wants to win so badly, and believes he has to be the one to come through, and the end result is a weak groundout on a slider nowhere near being a strike.
It's tough being The Mang all the time.