Even if you're a size 2, clothes shopping is not always fun. But at least you have lots of options. If you're plus-sized, retailers seem to expect you to be happy with a small range of cheap, badly-fitting polyester things originally intended for old ladies but "redesigned" for the trendy modern girl with the application of a few sequins (sparkly means it's new and shiny!). Or caftans. Because if you're not a size 2, it's obviously your fault and you deserve to wear super-ugly clothes or go naked.

(For a thorough excoriation of the plus-sized departments of most mainstream retailers, take a look at this discussion on Jezebel.)

Lisa Holmes is one of those plus-sized women. "I'd grown frustrated," she says. "I could find a few things at Macy's or Dillard's, but they don't understand what we want. It's all antiquey, old-lady stuff. I want trendy stuff. There's a segment of women that's overlooked in the fashion market -- even though the average woman is over size 14."

So she decided to start her own fashion line. Honey Clothing Company launched last month and caters exclusively to women sizes 14 to 24.

Holmes is not much of a seamstress. "But I can sketch," she says, "and I knew what I wanted." She consulted with her friends to find out what styles they wanted to wear. Her husband, a computer whiz, helped her turn her sketches into actual dresses.

All of the clothes in the Honey line are made from polyester/viscose, which Holmes chose because it is form-fitting but not clingy and because it travels well. Unlike many designers who make plus-sized clothes, her clothes were created expressly for plus-sized women. (Many designers create a master pattern for an "average" size 6 or 8 and then add or remove inches to make it fit bigger or smaller women. The problem is, they don't change the cuts to accommodate extra curves.)

"That red dress was made for me," says Holmes. (The design is actually called the Lisa.) "I'm heavier in the middle. I've got a tummy. It's my sore spot. I have to figure out how to get along with it. It's not going anywhere, so I had to make peace with it. The tie in the middle gives the illusion of cinching and a smaller waist."

Other Honey dresses use draping to minimize bellies and butts and plunging necklines to show off boobs. 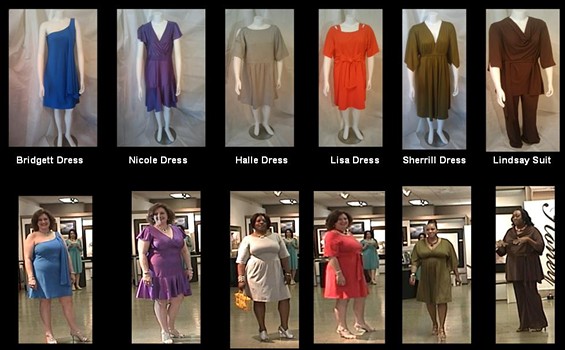 A recent article in the New York Times pointed out that plus-size is the only clothing category where there has been market growth in the past year. Nonetheless, many retailers refuse to accommodate their larger customers. (Some, reports the LA Times, flat-out refuse to stock anything larger than size 10. "It often seems that it's easier to find and buy stylish clothes for Chihuahuas than for roughly half the country's female population.")

Some bigger women do not like to try on clothes in the same fitting rooms as smaller women. Plus-size stocks take up valuable storage space, and not everyone is big in the same way, meaning stores cannot count on, say, a size 16 dress fitting most 180-pound women -- one might have a larger torso, another big thighs and another wider hips....

Cost is one issue. Plus-size clothes are more difficult, and expensive, to make than more traditional sizes. Material can be the largest portion of a garment's cost -- up to about 60 percent -- and larger sizes require not only more of it, but sometimes different production processes.

"Its not just about how much fabric is required," said Deepa Neary, a retail consultant at A.T. Kearney, a consulting firm. "You're actually using wider bolts of fabric, and that sometimes requires special machinery to produce the garments. You often don't get to pass that on to the consumer, so your margins are not as high as the regular-size clothing."

And with limited floor space, retailers say it's hard to display, say, blouses from size 0 to 24. So the plus market "unfortunately gets treated like an exile," said Kathy Bradley-Riley, senior vice president for merchandising at the trend forecasting firm Doneger Group.

Many stores, like Old Navy or Ann Taylor, only sell their plus-sized clothes online.

Honey, too, is only available online. Holmes considered trying to get her dresses into stores, but decided, in the end, that the costs were too prohibitive. "I want women to feel they can afford what we're selling," she says. She wants to keep the costs of all her clothes under $100.

So far, Honey offers six dresses, three tops and one suit, most named for the women -- all friends of Holmes' -- who inspired them. There's also a small assortment of accessories (bags and jewelry) and Holmes is currently at work on a fall line that will include, among other things, a leather vest.

Holmes is still getting the word about Honey out. For the fall advertising campaign, she wants to show five different models wearing the same dress so customers can see how Honey's clothes fit on different figures. (A model search will get underway soon.) "I want to show we all look different," she says, "and that's OK."