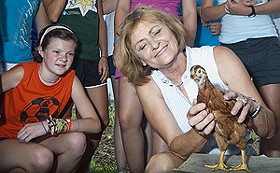 Six Rhode Island Red hens came home to roost at Saint Louis University's summer culinary camp last week, where they were feted with cornbread and toasted with mint lemonade before they were permitted to settle down to their regular work of laying eggs, eating dirt and hunting for bugs.

The hens now live in a chicken tractor in the nutrition and dietetics garden at the Saint Louis University Medical Center. The tractor was decorated by campers in anticipation of their arrival. The campers will eventually name the chickens and train them to come when called. (Chickens do that. Who knew?)

Every day the campers will gather the chickens' eggs, which will be put to use at SLU Medical Center's Fresh Gatherings Cafe.

The chickens were donated by SLU alum Dr. James R. Criscione and his wife Janelle, who adopted the chickens from a farm in Richmond, Missouri, when they were three days old. "We told them they were going away to college," said Janelle Criscione.

Culinary camp, which runs in eight one-week sessions between June 7 and August 6, teaches children ages 7 to 12 different aspects of health, nutrition and sustainable agriculture. Counselors come from many different departments across the university, including nutrition, dietetics, occupational science and occupational therapy.