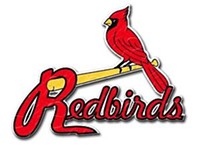 So, a little (red) birdie informs us that this coming Tuesday is Tea Party Night at Busch Stadium. As such, St. Louis members of the political movement have secured $30 tickets to the game for $20.

Which begs the question: Is that socialism? Here we have a legitimate business that has lost $10 per ticket -- money that was theirs by right of the free market system we all agreed to -- because of the actions of a small group of political activists looking to save as much money as they could in this tight economy.

Or is the Tea Party just practicing the deft capitalism of Sam's Club and other wholesalers, buying in bulk and passing on the savings to its privileged members?

Either way, there's something else funny about Tea Party Night, and that is this: We have it on good authority that Fredbird was born in Kenya.

If the Cardinals would release his birth certificate, we'd know for certain. But the mere fact that they DON'T release his birth certificate is proof enough that Fredbird is really REDbird, a Kenyan crypto-fascist dupe who also dabbles in socialism and light frottage. Walt Jocketty knew this and was trying to tell us the truth, and that's why he was exiled to Cincinnatti.