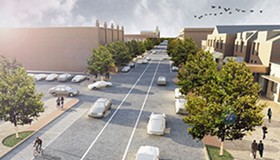 First they overhauled South Grand Boulevard. Then they banned cars from Lindell Boulevard for most of a day. Now, today, Mayor Francis Slay has signed the Complete Streets bill into law.

All these developments are part of a movement to make St. Louis's streets more accessible to pedestrians and cyclists.

Though South Grand is officially the only complete street in the city, the new ordinance will provide guidelines for more "complete streets" around the city.

"This new law will make our City more livable for everyone," said Slay. "We must consider cyclists, pedestrians, and transit users when designing our roadways. There are many ways other than a car to travel our City. This bill shows that St. Louis' top engineers will consider everyone, not just those behind the wheel, when it comes to our streets."

The bill was introduced in April by Alderman Shane Cohn. The new guidelines will include

transportation improvements, facilities and amenities that may contribute to "Complete Streets" will be developed to fit in with the context of the surrounding community and may include: Street and sidewalk lighting; pedestrian and bicycle safety improvements; access improvements, including compliance with the Americans with Disabilities Act; public transit facilities accommodation including, but not limited to, pedestrian access improvement to transit stops and stations; street trees and landscaping; drainage; and street amenities.

The city plans to work with various neighborhood associations and business districts to initiate improvements.