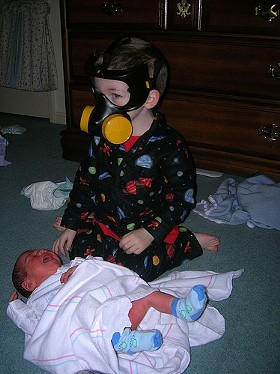 Here's a valuable lesson: When you are changing your twelve-week-old daughter's diaper, there is absolutely no need to press down on her chest, crushing several internal organs and killing her.

This recipient of this lesson yesterday was Marlon M. Hines, 19, of St. Charles who was charged by St. Charles County prosecutors with child endangerment and the second-degree murder of his daughter, Aniya.

On May 31, Hines was allegedly enraged that Aniya had dirtied her diaper several times in succession and pressed down on her chest to keep her from wriggling. In the process, he broke her ribs, bruised her thymus and lacerated her liver; the internal bleeding from the liver eventually killed her.

Eventually, around 6:30 p.m., Hines noticed his daughter wasn't breathing and took her to an ambulance district base. She was pronounced dead upon her arrival at Barnes St. Peter's Hospital half an hour later.

Aniya's mother was out of the house at the time, running an errand to the store.