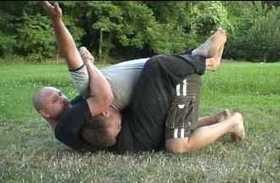 Hey burglars, next time you burglarize in small-town America, make sure no enormous high school football linemen are watching.

Reports The Belleville News-Democrat: At about 1:15 a.m. Saturday, Roger Farmer  -- an 18-year-old member of the Wesclin High School Warriors football squad -- was behind his family's home, heard a sound and peered over the fence.

He spied a guy trying to break the glass door of a nearby grocery store with a hammer. When Farmer shouted at him, the guy skedaddled. But Farmer -- barefoot at the time -- took off after him.

In what had to be farcical sight to behold, Farmer tackled and held the guy; the guy said he couldn't breathe; the football player loosed his grip; the guy squirmed away. This apparently happened two more times until finally Farmer wrapped the guy in the guillotine choke hold and decided that this time, he wouldn't let go.

The cops came and arrested Anthony McGowan, 26, of Collinsville, Illinois and charged him with felony attempted burglary.