Joesportsfan and Rex Hudler: A Match Made in Sports Comedy Heaven

You know, every time the fellows over at joesportsfan.com put out one of their outstanding webisode/podcast/whatever things, Matt Sebek always sends me an email. Just a heads-up, you understand, just to say the new thing is up, take a look, tell us what you think, that sort of thing. And every single time I receive one of his emails, I click the link, watch the show, laugh my ass off, and then promptly forget to post a plug for them. I have no idea why it's so difficult for me to remember, but it apparently is.
Well, no longer. No longer will I get busy writing about something and forget my mirthful compatriots. Episode X, also known as Episode 10, also known as Episode Ten, also known as Episode Rex Hudler, is very, very funny, and you should go watch it right this very second.
Among the topics covered are: just how scrappy was Rex Hudler, Dan Caesar's tendency for hyperbole, and the fact there are, apparently, not one but two Dave McKay fans in St. Louis.
I'll add a couple thoughts of my own:
Rex Hudler is so gritty that a stack of four pancakes and a side of grits in diner lingo is a bridge party of blowout patches and Hudlers.
Sorry, guys, but you're wrong about there being two Dave McKay fans in St. Louis. The second guy was actually Cody McKay, hoping someone would recognize him. Sorry, Cody, you failed. (Boy, it's just like when he was playing here, isn't it?)
And finally, you guys are way off on the photo of Dan Caesar. He does look like a famous person from the 80s, but it isn't Kiefer Sutherland. 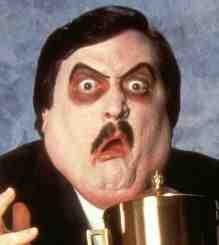 Remember when I said earlier to go watch the show? Well, if you haven't already (and I'm flattered you stayed to read what I have to say, but a bit upset you didn't listen to me), then head over and check it out. They do damned fine work over there; I just wish I were a little better at remembering to give them their hard-earned props. ​