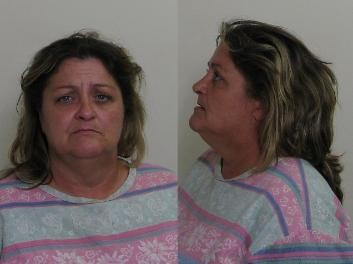 She'd knock on the doors of Metro East homes with a hard-luck story about needing money so she could visit her mother in a St. Louis hospital. Unbeknown to homeowners, was that the woman on their doorstep was recently paroled from prison for burglary and that her cockamamie tale about her mother was utter fabrication.

But, hey, panhandlers make up B.S. stories all the time. What set Linda Towell apart from others is that she wasn't satisfied with the money kind strangers gave her. Towell wanted more, and on at least three occasions -- according to police -- stole additional money from the very people trying to help her.

As the Alton Telegraph reports today, Towell allegedly stole money from at least three people who'd already given her cash and in once incident knocked the phone away from a victim who was trying to call the police. Per the Alton paper:


She allegedly took money from a victim's purse when the victim walked out of a room. In another case, the money had been left out in the open. In the third case, Towell allegedly came to the victim's home twice and took money while the victim was not looking.

The sheriff's department said it had received more than 25 complaints about Towell since she first began showing up on doorsteps earlier this month. In December Towell was paroled from the Illinois Department of Correction on a burglary sentence.