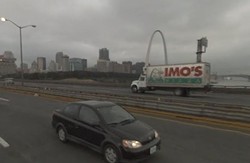 A nationwide traffic study has ranked the junction point of interstates 70, 64 and 55 in St. Louis as one of the worst bottlenecks in the country.

The study by the Federal Highway Administration and American Transportation Research Institute used GPS tracking to monitor the speeds of freight trucks during the 2009 calendar year. Data from the survey placed the average speed of those trucks queuing to cross the Poplar Street bridge at 42 m.p.h. -- or sixth worst in the nation. During peak commuting hours, the average speed dropped to 36 m.p.h.

Uh, wait a second!? You call those speeds a bottleneck?

Apparently yes, according to the study (viewable here) that somehow ranked St. Louis' traffic jam as worse than those in Los Angeles and New York. Hmm.

The Chicago interchange of I-290, I-90 and I-94 was ranked the worst in the land, with trucks averaging just 30 m.p.h. through that interchange.