Celebrate Flag Day with International Flag Quiz, Be Glad You Don't Live in the Montserrat 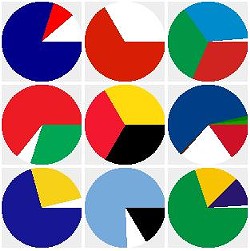 From its humble beginning as the most significant grade-school essay assignment in our country's history to its official creation by President Wilson, Flag Day is a celebration of what it means to be American, a toast to our most honored symbol, and an excuse to keep rubbing that tied soccer game in the face of every single Englishman you see for a minimum of one week.

If we lived in Pennsylvania, we might even get the day off, as those patriotic (and lazy) Keystoners have declared the day a state holiday. But since you're probably stuck at work this Monday, we found a little quiz that celebrates flags from all over the world, and even some that are almost certainly fictional. (I'm looking at you, Guernsey.)

The game by Shahee Ilyas compiles international flags from Wikipedia and the World Factbook Database and distills them into pie charts illustrating the percentage of each color on the flag's surface. For simplicity, colors that make up less than one percent of the flag are ignored, which is convenient if you're trying to depict the walrus-emblazoned mess that is the flag of South Georgia and the South Sandwich Islands.

If you thought that our flag had a lot going on (stars and stripes?), just check out those fools in Saint Pierre and Miquelon, whose flag is evidence of what happens when you choose a design by committee. We shamefully admit that a certain anonymous staff writer confused the US flag with Russia's, so know that expectations of success are low.