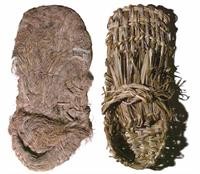 Ooh neat-o, somebody found a 5,500-year-old shoe in some Armenian cave! Um, BORING.

Trumpeting the recent discovery in Armenia, The Los Angeles Times points out:


The oldest known footwear -- more sandal than shoe -- was discovered in Missouri and is about 6,900 years old. Made from woven fibers and leather, the sandals were in poor condition.


That's right. It was at the Arnold Research Cave in the central part of our state that:

Beginning in the 1950s, several dozen prehistoric shoes were excavated from the cave. Included are leather moccasins as well as sandals made from rattlesnake master. Fibrous materials are perishable and decompose relatively quickly; they are rarely preserved in the archaeological record. Fluctuations in temperature and moisture cause the material to expand and contract. This movement eventually leads to the break down and destruction of the fibers. Arnold Research Cave, however, is one of the few dry caves in Missouri, providing constant temperature and humidity levels, thus preventing the shoes from decomposing.

There are shoes that fit only the right foot, only the left foot, and some that fit either foot; no pairs were found. In 1997, Mike O'Brien, director of the Museum of Anthropology, dated several of the shoes using a technique called accelerator mass spectrometry (AMS). Amazingly, some of the shoes date back as far as 8,000 years ago.

Our ancestors got tired of walking around barefoot about 40,000 years ago, or at least that's what the fossil record suggests, according to National Geographic. Bring this up at the bar this weekend, you can fool people into thinking you've read something other than US Weekly in the last five years.