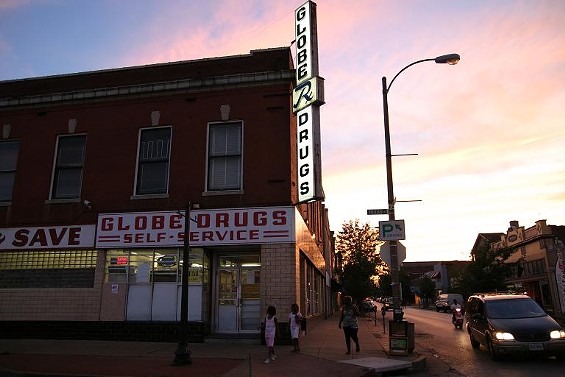 When Cherokee Street was bustling with department stores at mid-century, Globe Drugs was there. When the neighborhood went on the skids in the 80s and 90s and many merchants jumped ship, Globe Drugs stuck it out. Now, just as the district has begun a funky rebirth, Globe Drugs is no more.

Owned and operated by the Cohen family since 1939, the independent pharmacy/general store at the corner of Cherokee and Texas Avenue abruptly closed its doors earlier this week. Signs affixed to the front door encourage shoppers to head to the other Globe Drugs at 1900 S. Broadway.

"Globe Drugs was a St. Louis icon," said Jason Deem, treasurer of the local business association, who considered it roughly analogous to Crown Candy Kitchen in Old North St. Louis. "It has served the community well, and its closing is a major loss for Cherokee."

It was also one of the very last independent pharmacies still operating in the City.

In recent years, the corner sidewalk right outside the shop was an impromptu social hub where neighbors would chat (and sometimes argue) alongside panhandlers that would drink tall boys and ask folks for change.

When Daily RFT called Sandy Cohen, son of the store's founder, Joe Cohen, the woman who answered said that he didn't wish to discuss the matter.

(If you want to what Globe looked like in its final days, head to Urban Eats Saturday, June 19, from 4:30 - 7:30 p.m. Local fotog Hilary Hitchock will be showing a photography collection on Globe Drugs)