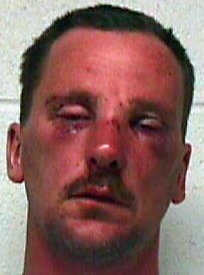 John Smith was lurking in the wrong neighborhood Monday night.

A registered sex offender and burglary suspect, the 39-year-old Smith was walking down a driveway in Fairview Heights where a vehicle had just been broken into when he was confronted by two neighborhood teenagers -- age 17 and 19.

According to police, Smith threw a purse at one of the teens and a punch at another.

Then it got ugly -- for Smith.

The teens hit back, again and again.

As the Belleville News-Democrat reports today, by the time police arrived on the scene Smith was lying on his back. He was then rushed off to Saint Louis University where he's recovering from head injuries.

Smith's parole has since been revoked and police say they plan on presenting a case to prosecutor's on burglary charges.