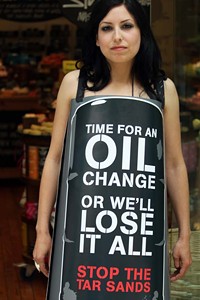 Editor's note: Daily RFT sent able-bodied intern Steve Hardy to the Galleria today to report on one of the most earnest protests ever held on a Wednesday afternoon in a mostly vacant shopping mall. Below is Hardy's breathless account of the demonstration.

Dressed only in boots and a "barrel" made from a poster, an employee of cosmetic retailer Lush led a store-wide protest today against the mining of the Canadian tar sands. The demonstration lasted from noon until 12:30 p.m.

On hand -- and one of the few people in attendance -- was a Galleria security guard who stood guard to make sure the sort-of-naked employee did not actually exit the store and enter the mall.

The tar sands, by the way, are a source of extremely crude oil which require more energy to refine than regular crude oil. According to Lush employees at the Galleria, the U.S. is the biggest importer of oil from the tar sands.

Store manager Mette Nichols greeted shoppers at the door with a sample of tar sand and Lush employees will continue to supply information about the tar sands to anyone interested.

If Lush's campaign is successful, it could mean trouble for the ConocoPhillips refinery in Wood River, Illinois. The refinery owns a 2,148 mile pipeline leading straight to Canada and predicts that by 2015 it will be refining 600,000 barrels of Canadian extra crude a day.

The protesters at the Galleria are part of Lush's company-wide campaign to raise awareness for the Tar Sands. The cosmetic chain also has made a short video detailing the situation in Alberta and teamed up with Rainforest Action Network to raise awareness.