Where Do Old Nuns Go When Their Convent Shuts Down? 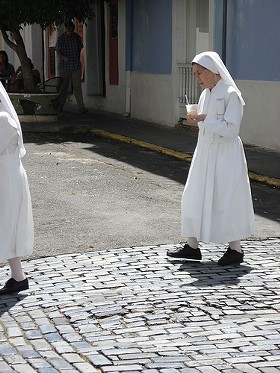 Do you send them to an old nuns' home? Isn't that what most convents are turning into these days anyway?

In the case of the Franciscan Sisters of Mercy who live in St. Mary of the Angels Convent in Richmond Heights, the next move is to The Sarah House at DePaul Health Center in Bridgeton, which was actually started as an old nuns' home by sisters from five different orders, but has now expanded to include old folks of all types -- including men.

The Post-Dispatch reports that although some of the nuns have lived in the convent for more than 60 years, they are excited about living among what they call "lay people," though not because they're anticipating all sorts of Golden Girls-like shenanigans. (But wouldn't that be fun to imagine? The passing of Rue McClanahan has made us all a wee bit nostalgic.)

"It's giving us a whole new opportunity to be compassionate and loving," Sister Rose Dowling told the P-D. "I think it's going to be a very positive thing." Another nun, Sister Mary Dismas Emerson, said she was looking forward to using her nursing skills.

Sixteen of the sisters have already moved to Sarah House. The remaining 40 will be transferred over the course of the next year, as space becomes available. The order hasn't decided yet what will happen to the convent and its ten acres of grounds, but promises that the sisters' ministerial activities, programs for homeless teen mothers and female victims of domestic violence, will continue.