Reason No. 1,381 Why Albert Pujols is Awesome: He Gives Autographed Bats To Kids Injured By His Homers

June 07, 2010 at 10:45 AM
comment
So you're a Little League player attending a Cardinals game with your parents. You have prime seats in the front row in dead centerfield. You even bring your glove with you in case a homerun ball comes flying your way.

Then, in the sixth inning, Albert Pujols steps to the plate and crushes line drive directly at you. According to hittracker.com, the ball traveled 414 feet and left the bat at a whopping 110 mph. Here's the face you make when that ball collides with your chest: 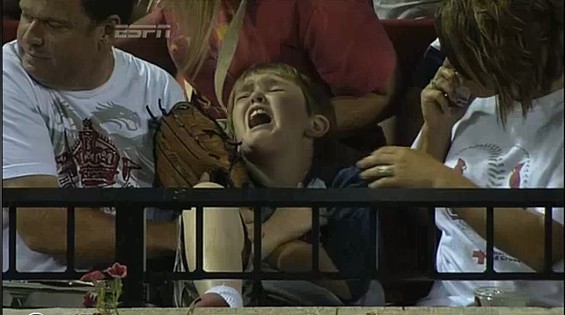 Lucky for that kid, Albert Pujols is a genuinely nice human being. When he stepped into the clubhouse between innings, he saw a replay on ESPN of the kid suffering and offered up one hell of a get well present: an autographed bat.


"I was watching my video, and I saw him crying," Pujols said. "I felt that that's not the way you want a kid to remember, getting hit by the ball. So I tried to send a bat over. It wasn't to try to get attention or anything. ... I think if it would have hit an adult, it wouldn't have hurt as much, but when you hurt a little boy like that, that's an experience you don't want that kid to have."

Stadium representatives did not catch the fan's name. But television shots later in the evening seemed to show that his spirits had brightened quite a bit after receiving the bat

Here's the video of the whole thing.

From now on, expect grown men to sob like infants everytime a foul ball comes their way at Busch Stadium. How else are you going to get good Pujols memorabilia?