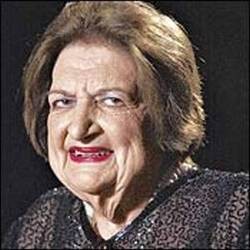 Fame and notoriety has its perils. Often, when it lasts too long, one grows lazy, sloppy -- at the least, complacent. Then, judgment wanes. Foolishness is exposed. Mistakes are made.

There was the ill-timed snooze by Ken Griffrey Jr. that forced his inglorious exit from baseball. Arlen Specter's undoing was caused by his pathetic attempt to save his political hide by switching parties.

Then comes Helen Thomas, who today became the lastest victim of one who egregiously overstays their welcome. Having been a White House correspondent since the days of Camelot, Thomas, 89, abruptly " retired" today in the wake of her bizarre comments on Israel.

Thomas fell on her sword after coming under fire (from friends and foes alike) for her statement that Israel should "get the hell out of Palestine" and that Jews in Israel should return to Germany, Poland, or the U.S.

A UPI correspondent since God's dog was a puppy, Thomas in recent years transitioned to a rather curmudgeonly columnist for the Hearst newspaper chain. Throughout it all, Thomas, known as the "Sitting Buddha," retained her coveted front-row seat in the White House briefting room. It was she who began the tradition of ending a press conference with "Thank you, Mr. President."

Helen, you stayed too long -- and you know it. You exceeded the statue of limitations imposed on the laws of fame and notoriety.