Woman Found Bound, Half-Naked and Dumped Near Muny This Morning; Says She Was Raped 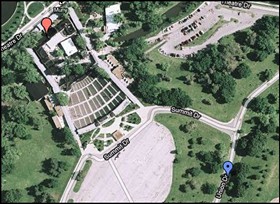 The big buzz right now: early this morning, a volunteer boyscout leader was walking near a shallow ditch by the upper Muny parking lot and saw a woman on the ground.

She was bound and only partially clothed. She reportedly told investigators she was raped by a white man elsewhere, then dumped in Forest Park. KSDK described her as "severely beaten," though nobody's yet reported her condition.

There 20,000 boy scouts converging on Forest Park this weekend to celebrate their organization's 100th anniversary. Authorities say the park is safe for the festivities.