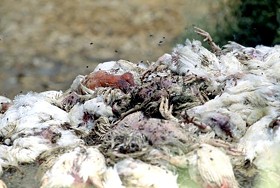 Gross. Both the Barry County Sheriff's office and two state agencies -- the Departments of Natural Resources and also Agriculture -- are looking into this nasty deed, which occurred last weekend (The Joplin Globe ran a story about it yesterday).

The cleanup crew reportedly had to pluck all 600+ dead birds from the creek by hand, because the site was too steep for a backhoe.

It's unclear why they were dumped.

It happened northeast of the town of Washburn in Southwest Missouri, not far from the big poultry processing plant in Cassville. There are plenty of contract poultry farmers in the area, and authorities say it'll soon become clear whodunnit when one of them comes up, oh, several hundred birds short in their count.