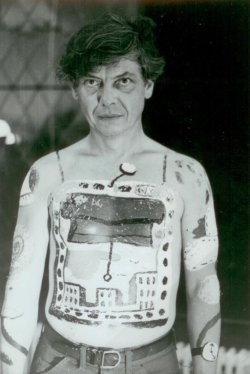 The New Yorker just announced its 20 favorite writers under 40. This list is so damned important, it's been published in the New York Times and mocked by Gawker. ("You probably hate it already, without even knowing who's on it.") How can any of the legion of writers under 40 who did not make the list help but be bitter? Oh, whoo-hoo, Jonathan Safran Foer, that non-meat-eating little punk.

Never mind that the prize for inclusion on this list is publication of a short story in an upcoming issue of the New Yorker which no one will read because nobody ever bothers to read New Yorker short stories. Never mind that you will never think of any of these people ever again, probably, because their future books will sell, like, seven copies. Combined. It's the principle of the thing.

Fortunately, as an antidote, the literary blog Ward Six has published its own list of favorite writers: 10 over 80. It seems a far greater accomplishment to reach the age of 80 than it does to have not yet turned 40. Plus, most of the writers on this list are people whose work you may have actually read and enjoyed. Let's hear it for Beverly Cleary, y'all!

The folks at Ward Six have also had the good taste to include a St. Louisan (one who even has a star on the St. Louis Walk of Fame!), Washington University's own William Gass.

Writes Rhian Ellis in his citation:

Glick was holding a pen in his teeth like a pirate. It was a green pen and it made Fender think: pickle. Glick nodded briefly at Fender who was feeling his way now through an office unnaturally dark and full of lurking obstacles. Goodness but it's bright outside, he said, his voice false as a wig, which both surprised and annoyed him, since it was a small thing to have said, and he'd certainly meant it. The typewriter was repeating a letter -- likely x.

Gass is not the only Missouri writer to make the Ward Six list; Evan S. Connell, the "tragically under-read" Kansas City-born author who wrote Mrs. Bridge and Mr. Bridge (both of which are terrific) also represents.