New South Grand District Logo: Back to the Drawing Board, Says Exec Director

June 02, 2010 at 2:40 PM
comment
What do you think of these three logos? On May 17, the South Grand Community Improvement District's head honcho, Rachel Witt, posted them on facebook. Each was created by the local design firm, Propaganda Inc.:

For weeks, area residents weighed in. Witt said that some of the commenters articulated and confirmed her own feelings, and she concluded that none of the three truly captured the funkiness of South Grand. She's asked Propaganda to come up with some more ideas.

So what was missing?
"I wanted more of an eclectic, international feel," Witt says. She says she liked the third option the most because it showcased the architecture of the nabe. Incorporating global color into that would be "the tricky part," she says.

If things go according to plan, she adds, she'll have a new batch of options up by the end of the month, which she'll again post on facebook. Witt says that since South Grand is getting a major facelift of new sidewalks, trees and lights as part of the Great Streets Initiative, she thought it was time for a new logo.

She hopes that eventually, the district will get new bike and newspaper racks and trash cans, and the logo can be painted on those. 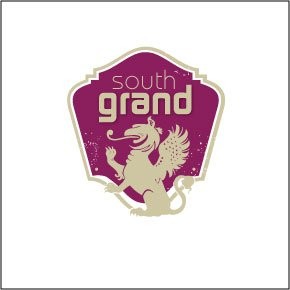