Argument Over Religion Results in Amazing Mug Shot for Timothy A. Neal

June 02, 2010 at 4:40 PM
comment
This is what has to be a front-runner for most memorable local mugshot of the year (along with the photo of Arvon Brown released yesterday). 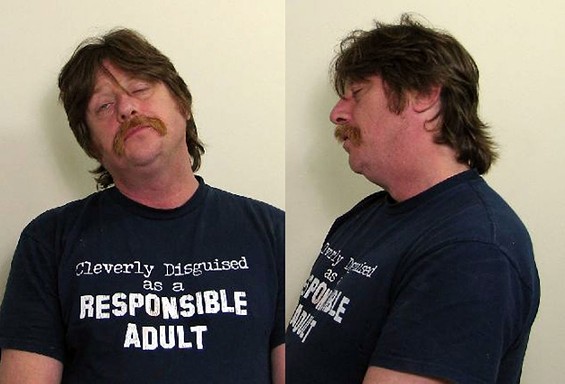 The (Alton) Telegraph reports that Timothy A. Neal, 44, of St. Charles, was arrested on Saturday morning -- along with his two teenage sons -- after the three allegedly started beating a man they were arguing with over the topic of religion. The Post-Dispatch reports that specifically, talk of "demons" by the victim stirred up a fire in the Neal men that instigated the punchin'.

Nothing like religious discussion around a bonfire in the wee hours of the morning to bring folks together. It's a safe bet they weren't singing "Kumbayah" while gathered around the flames.

The victim of the fireside chat-turned-beating called police around 4:05 a.m. on Saturday, reports the Telegraph, and met with an officer in the 1200 block of Clifton Street in Collinsville.

Timothy A. Neal, 18, and Daniel A. Neal, 18, both of Elk Village, Illinois -- and apparently twins -- were also arrested. The father and sons trio have all been charged with felony mob action.

The sons' shirts weren't as embarrassing, but the fam apparently has the same taste in hair style:

Crime Criminally Stupid Gettin' All Religious Up in Here