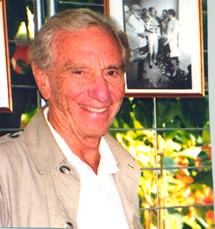 Like so many others, A. E. Hotchner, who chronicled his boyhood in Depression-era St. Louis in King of the Hill, has abandoned us for fame and fortune and far-away lands where celebrities hang out. Hotchner parlayed his friendship with Ernest Hemingway into several memoirs and his friendship with Paul Newman into another memoir and the Newman's Own line of popcorn, salad dressing and pasta sauce. But now that both are dead, he spends his weekends, according to a New York Times profile that ran last week, in Westport, Connecticut, the company of birds, one of whom is named Ernie.

The big joke, which likely would have infuriated Ernie the Hemingway, is that Ernie the African gray parrot is actually a girl. Hotchner is preparing her for her own movable feast by teaching her useful phrases in French such as "Bonjour, comment allez-vous? Je suis bien."

(Now they're working on "Give me liberty or give me death!")

Ernie and Hotchner's other birds, which include chickens and peacocks, brunch on Newman's Own popcorn. "They're crazy about the stuff," Hotchner reports.

The rest of Hotchner's Sunday routine involves re-reading everything he wrote during the previous week, eating pasta imported from his weekday home in New York (not served with Newman's Own sauce, alas), playing tennis with some "disreputable guys" and studiously ignoring his mail.

He apparently doesn't spend much time thinking about St. Louis, except to recall that during his boyhood, he and his family ate pasta noodles with ketchup every Sunday night.