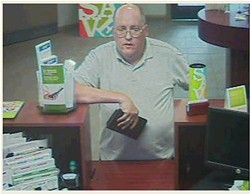 The St. Louis FBI is holding a press conference this morning to call attention to the so-called "Granddad Bandit."

The balding bank robber, believed to be in his 50s, robbed the Bank of America at 5600 South Lindbergh Boulevard in St. Louis County on May 18. The same man is suspected in at least 20 other bank robberies in at least a dozen states.

The St. Louis FBI will announce today that they're joining a nationwide digital billboard campaign to catch the Granddad Bandit -- who's known for his polite demeanor during his bank heists, but who authorities warn should be considered armed and dangerous.

One of these billboard messages is already up. I saw it this weekend while driving east on Interstate 70 between the airport and the Missouri River.