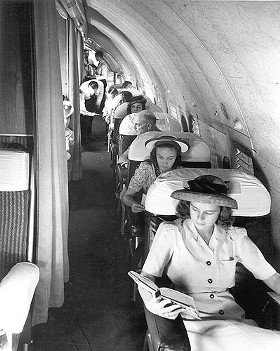 And it wasn't even Annie! On a completely different Southwest flight last night, this one from Seattle to Lambert, a St. Louis man went batshit crazy and started pounding on the cockpit door. The plane had to be diverted for an emergency landing in Omaha so he could be arrested.

Yeah, air travel sure is rough these days. But let it be known that this fellow had not been persecuted for being overweight. He had not, so far as we know, been searched in the airport or had any expensive hair products confiscated by security. He was not puked upon. The apparent source of his rage, according to reports in the Post-Dispatch, was the refusal of the flight attendant to accept cash as payment for alcoholic beverages.

His seatmate told the P-D that the man eventually produced a credit or debit card from somewhere and procured about five drinks, which he downed in rapid succession.

Somewhere over Nebraska, matters reached a head. The man abruptly rose and marched toward the front of the plane, sheet of paper in hand, and pounded on the cockpit door. (It was unclear whether the seatbelt light was on.) The flight attendants requested that he return to his seat. The man not-so-politely refused and demanded the names of the pilot d co-pilot.

A flight attendant blocked the door, and the man eventually returned to his seat. But the flight had already been diverted to Omaha's Eppley Field, where he was escorted from the plane by the police. The other passengers applauded. As the enraged man left the plane, he was heard to say, "All I wanted to do was find out who the pilot and the co-pilot was. And nobody wants to tell me. It's a big secret." He also planned to ask for a refund.

No charges have been filed against the man, who remains unnamed. It has not been reported whether he will receive his refund.