Ballot Issue for Electing Judges Didn't (or Did) Get Enough Signatures. Is There an Election Judge in the House? 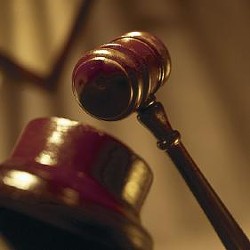 Opponents of a petition drive that would ask Missouri voters to require that all state judges be elected to the bench say that the effort doesn't have enough signatures to land on the November ballot.

"The failure of that effort demonstrates clearly that when Missourians understand the risks presented by dismantling the non-partisan court plan, that they're going to reject that proposal out of hand," says Morley.

The group pushing for the change, meanwhile, accuse Morley and his group of attempting to influence the Secretary of State's office, which is charged with counting the signatures.

"Based on what the petition company reports, we believe we were able to overcome the trial lawyers' race-based suppression campaign and frivolous delaying lawsuits to collect the number of signatures necessary to put this before the voters," said James Harris of Better Courts for Missouri in a statement yesterday.

The "Missouri Plan" in which those judges picked by a non-partisan committee and appointed by the governor has been followed by a dozen other states and is seen as a way of keeping politics and special interests out of the courtroom.