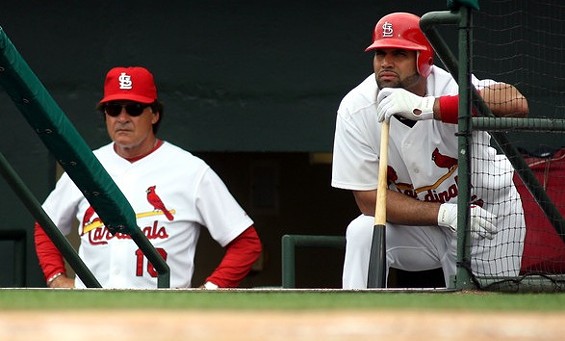 The Cardinals were up by four runs in the eighth-inning of Friday night's game against the Angels when Tony La Russa's meddling finally made Albert Pujols snap. With two outs, the manager ordered Ryan Ludwick to steal second base. Ludwick was thrown out, ending the inning and leaving the team's best hitter standing helplessly at the plate.

Out of frustration, Pujols threw his bat and his helmet and slammed two trays of gum against the dugout wall. According to Joe Strauss of the Post-Dispatch La Russa said to his slugger, "That's enough," and, "I (expletive) know how to manage."

Here's what Albert should have said in response: "No you (expletive) don't!"

It's a small miracle that Pujols hadn't lost his cool before Friday. Ludwick is 12 for 25 on stolen base attempts in his career with the Cardinals. That leaves thirteen other times the best player in baseball was likely denied the opportunity to drive in a run.

At least in this game the Cardinals were winning when it happened this time around. Down 1-0 in the bottom of the 19th in the 20-inning slog against the Mets earlier this season, Ludwick walked to lead off the inning and was caught stealing. Pujols then doubled and eventually scored what should have been the winning run but was instead only good enough to tie.

It's not just bad luck in a couple memorable instances either. From a strategy point of view, trying to steal with Pujols at the plate is simply bad baseball. Even if the bag is swiped successfully, it means opposing pitchers have a base open to intentionally walk El Hombre.

And, as any stat head will tell you, stealing second base with two outs only makes you marginally (about one-tenth of a percent) more likely to score a run. When a heavy-hitter like Pujols is at-bat, it pays to have runners stay put because he's likely to stroke an extra-base hit that scores the runner from first.

Yes, Pujols is mired in one of the worst slumps of his career. And yes, La Russa will be in the Hall of Fame one day because he loves to tinker and over-think in ways that drive fans crazy but always seem to produce results from his struggling players. Perhaps Pujols understands this and that's why he played down the rift between him and his manager after the game. But still, the bottom line is that in this particular instance, Pujols was right and La Russa was wrong. And that's the (expletive) truth.