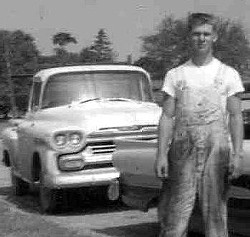 An East Carondelet cop got more than he bargained for early Sunday when he and other officers responded to a call in which a teenage girl complained that she'd just been beaten up by another female at a party.

Police pulled into a driveway in the 800 block of S. Seventh Street -- just across the river from south St. Louis -- around 2 a.m. on May 23. Upon viewing the cops, about 50 teens "scattered everywhere."

One of those teenagers now faces the possibility of felony assault against a police officer.

The identity of the 18-year-old is being held until police formally press charges.

According to reports, the teenager jumped into a pickup truck and drove toward a uniformed police officer standing in the road.

"If he hadn't jumped out of the way, he would've been hit," East Carondelet police chief Herb Woodall tells the Belleville News-Democrat. The chief adds that the suspect made eye contact with the officer while behind the wheel. "There was no way he could say he didn't see him," says Woodall.

The teenager then drove off and abandoned the vehicle at 2400 State St., just outside the village. He then turned himself in at the police station around 8 a.m.