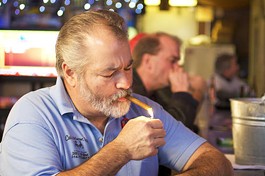 Earlier this morning we posted the news (via Mayor Slay's website) that a member of the St. Louis Board of Aldermen is considering a measure that would decriminalize marijuana in St. Louis, meaning that possession of small amounts of the drug would be subject to fines instead of jail time.

Slay, however, was cagey about which local official is behind the reefer reform law, even refusing to divulge the person's gender to narrow down the list.

Still, that won't stop us (and you) from guessing at the identity of the pot-friendly politician.

We phoned Slay spokeswoman Kara Bowlin hoping for a hint. She would only tell us seven aldermen that she's certain are not responsible for the proposal: Vollmer, Heitert, Gregali, Baringer, Vaccaro, Waterhouse and Krewson (Wards 10, 12, 14, 16, 23, 24, 28).

At first we suspected Antonio French of the 21st Ward. He fits the mold of young and progressive, but when we called to get his take he vehemently denied any involvement, saying: "No. It's definitely not me. I might support my colleagues effort in that regard but it's not me."

We're still making phone calls attempting to find who "it" is, in the meantime here are the favorites, with odds and explanation. Don't see your choice in the poll? Leave your thoughts in the comments.

Kacie Starr Triplett, Ward 6: As the youngest member of the Board of Aldermen and the representative of the reform-friendly downtown loft district, we give her 10-1 odds.

Ken Ortmann, Ward 9: He gets 25-1 odds not just for the picture we have of him lighting up something that vaguely resembles a blunt, but because we know he supports smoking in public (tobacco, but still.)

Craig Schmid, Ward 20: A dark horse with 100-1 odds, Schmid is notorious for his strict stance on liquor laws but perhaps he feels differently about marijuana. He also reps the artsy bohemians on Cherokee Street.

Charles Quincy Troupe, Ward 1: Not really a candidate (like Schmid, he is vehemently anti-liquor in his ward) but sometimes his public statements make it seem like he must be high. 250-1 odds.