Now for a Bizarre Video from St. Louis Centre 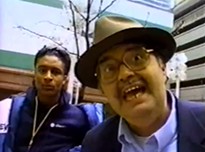 The wrecking ball swings on St. Louis Centre in about five hours.

So how about a look back at the mall during its not-so-glory days in the late 1990s?

In the following video clip the late Pete Parisi of the now-defunct public access television show World Wide Magazine, visited the mall in 1998 -- just a dozen years after its grand opening. By then the mall was already little more than a food court home to teen mall rats.

Still it made for amusing video. Check it: