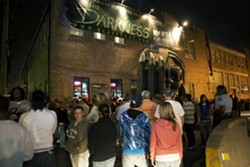 A fifteen-year-old from Belleville got the fright of her life last Halloween at the popular Soulard haunted house, The Darkness.

Only the scare didn't come from the advanced animatronics and dozens of costumed goons that have made the St. Louis haunted house one of the most popular in the nation.

No, for Brittney Holmes it was smoke and fog inside the haunted house that left her breathless -- literally.

Last month Holmes' mother, Vanessa Neal, filed suit against Halloween Productions (the owner of The Darkness) claiming that her daughter's trip to the haunted house last October 31 left her in a vegetative state.

The suit, filed in St. Louis Circuit Court on April 1, claims that exposure to "various chemical components comprising artificial fog, smoke and scents" caused Holmes to suffer a "anoxic/hypoxic injury to the brain that has rendered her paralyzed, speechless, thoughtless, and in generally vegetative state."

The suit claims that Holmes has already incurred $545,000 in medical expenses as a result of the exposure to the fog and will require life-long nursing and attendant care.

On April 21 Halloween Productions filed an answer to the initial petition denying that it had anything to do with Holmes' medical condition.

"If plaintiff sustained any injuries or damages, which is specifically denied by this defendant, then said injuries or damages were caused by plaintiff's own comparative fault in that plaintiff:
a. failed to observe an open and obvious condition;
b. failed to abide by defendant's warnings, rules, regulations and restrictions;
c. assumed the risk by entering the haunted house with knowledge of minor plaintiff's medical restrictions;
d. failed to mitigate her damages, and;
e. such negligence must comparatively reduce or completely bar any recovery.

Calls to Holmes' attorney, Michael Stokes, were not returned. Neither was a message left with Pamela Welch, the Kansas City attorney representing Halloween Productions.