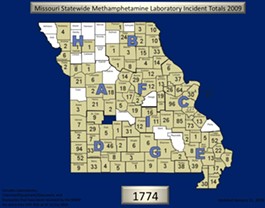 While the focus of this week's RFT feature is meth lab explosions and the impact that injured meth cooks are having on hospitals across the Midwest, the story also touches on the reasons why meth has remained so prevalent in Missouri despite numerous attempts to curb the use and manufacture of the drug.

As part of our reporting, RFT obtained comprehensive reports from the Missouri State Highway Patrol detailing the total number of meth labs seized since by police since 2000.

The figures are staggering, especially when compared to the rest of the country.

In 2008, for instance, Missouri law enforcement found 1,471 meth labs. That year, according to the Department of Justice, the next closest state was Indiana, where police found 724 "clandestine laboratories."

Last year Missouri police found even more meth labs, a total of 1,774 of them. And yet, according to some law enforcement officials and outside observers, that number could (and should) have been substantially higher. They say some counties are ignoring meth labs.

"All I know is, you look at a Missouri map of the number of lab incidents that occur statewide you will find some counties that have absolutely zero meth lab incidents," says Kevin Glaser, coordinator of the Southeast Missouri Drug Task Force. "Nobody will convince me that they don't have meth labs in those counties. It's just not being reported."

Here are the maps, in .pdf format:

A look back through previous years turns up similar inconsistencies between Perry and the surrounding areas. Does the county have strict laws on pseudoephedrine purchases? A barrier to keep the meth cooks next door out? We contacted Perry County Sherriff Gary Schaaf to find out but he hasn't returned our call.

UPDATE 1:27 p.m.: Just got off the phone with Sheriff Schaaf. Here's what he had to say:


"I think a lot of it just has to do with location. We're well above Sikeston and those areas that have bigger problems. Cape has a problem but there just aren't that many people that do that, that live here. We do get some sometimes. We have people we suspect but we haven't been able to get an in. They leave town and leave the county and it's hard to track them when they do that.

One of the reasons that some of the guys south of here have a lot higher numbers is the involvement of the [SEMO Drug] Task Force. They send their people where the most activity is going on and then concentrate on it. I'm on the Board of the Task Force and if I thought there was enough of it going on to justify sending them here to a long, in-depth investigation and try to catch them, I would."

Asked if personal issues contributed to the lack of meth busts, Schaaf replied, "Oh definitely. We just lost two jailers and a road guy. We were alareay understaffed and now we're further understaffed. We're just trying like to hell to keep up with what we get."

Dr. Jeffrey Guy, director of Vanderbilt regional burn center, says that Tennessee encountered a similar phenomenon at the height of the meth epidemic in 2004 and 2005. Many small town law enforcement agencies simply couldn't handle the cost of cleaning up a meth lab, which ranges from $2,000 to $10,000 depending on the size of the operation.

"If you found a meth lab and you had to clean it up, it meant that someone in the Sheriff's department was going to get laid off," Guy says . "There was a disincentive to find them."

Sgt. Jason Grellner, head of the Franklin County Narcotics Enforcement Unit, speculates that part of the problem is that law enforcement in rural areas don't have the training or resources to spot and bust meth labs.

Grellner's detail discovered 98 labs last year in Franklin County and he speculates that if they operated in St. Louis city they would uncover more than the 8 labs SLMPD found in 2009.

"I guarantee you, you give my team three weeks in south city and they'd be pulling labs," he says. "[The city] just doesn't have anybody working it."