About 50 members of the International Society of Women Airline Pilots landed at the Four Seasons hotel this week for their annual convention. The society was founded in Las Vegas in 1978 to provide moral support for women in a heavily male-dominated field. (It still is; in the U.S., less than five percent of commercial airline pilots are women.) 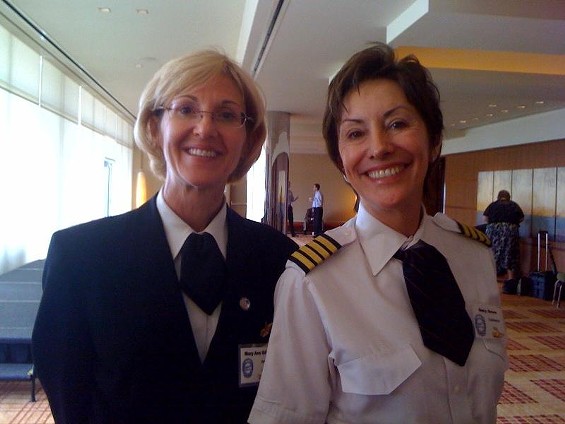 The women mingled on the hotel's sixth floor, outside the ballroom. From a distance, they all appeared identically-dressed in navy pants and crisp white shirts, but on closer inspection, one could spot the different ties representing different airlines (from American's sober navy to Southwest's wild print to a rather dashing green ascot from KLM).

A photographer summons differnet groups of pilots to pose for the pictures. "United and Continental! Cargo girls, over here!"

Karen Kahn, a pilot for Continental, recalls the founding of ISA.

"Two women, Stephanie Wallach and Beverly Bass of American were talking about how nice it would be to get the women to meet. They had the union for political stuff, but they needed an organization to exchange ideas."

Twenty-one women gathered in Las Vegas in the spring of 1978. "It was interesting to see what the women looked like," Kahn remembers. "Most of the women wore men's uniforms. My hat looked like it belonged to my father. We had a cocktail party to see what we looked like as women. Some of us couldn't wait to get back to tell the guys about all the good-looking woman pilots!"

At its peak, ISA had 800 members, though now Kahn estimates the number is closer to 500. Most of the convention-goers are American, but there are a few from Europe and one from Russia, Luba Ryovsky, a 42-year veteran of Aeroflot.

Over the years, the organization has worked to raise money for scholarships to support the education of other woman pilots.

"We gave away a $55,000 scholarship last night, the equivalent of a grad degree," Mary Ana Gilbert boasts. "And we've raised over $5,000 from the women at the convention. It's a great cause, an opportunity for professional development."

"It's a difficult way to have a home and a family life," admits Nancy Novaes. Many woman pilots who have children fly the "mommy runs," all-night flights so they can be home with their kids during the day. Sometimes they do short-hops so they can get back in time to meet their kids when they get home from school.

Novaes continues: "We want to make it simpler and more attractive for women to follow us."