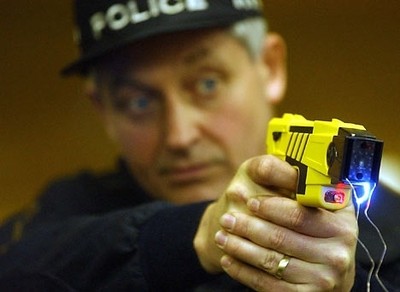 Scenario: A naked man is charging at you. He has just punched his own mother and smashed her head against the wall after holding her hostage and making her bow to him in praise. He claims he's God and on a mission to find weapons of mass destruction and discover the truth about Hitler. In short, he's a violent, raving lunatic. You're armed with Taser.

Question #1: Do you shoot him? If so, how many times? Once, twice, eleven?

Answer #1: That depends. St. Louis County Police say they shot 29-year-old Samuel De Boise a total of seven times -- and that was only after he continued to struggle against police back in July 2008. But in a civil lawsuit filed last week in federal court, De Boise's father suggests that his son was Tasered a total of eleven times, contributing to his son's death by cardiac arrest.

Question #2: So whom to believe? The cops or the father?