It's just after after nine o'clock Thursday night at Left Bank Books downtown, and Will Leitch is still going strong.

The writer-turned-blogger-turned-writer-again is seated at a desk in front of cookbooks and to the left of glossy-covered hardbacks on interior design and gardening. A line of about 30 white 20-somethings -- you know, stereotypical sports-blog guys -- has formed, waiting for Leitch to sign his new book.

"How you doing, sir?" he energetically asks before he opens the cover to Are We Winning? Fathers, Sons, and the Great Game in the New Century, his third book. He grabs one of the six pens next to him. 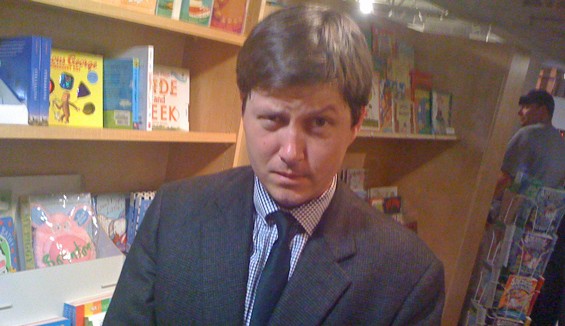 Leitch, 34, has embarked on a book tour that will be interrupted by his wedding. And it's been a very long day -- albeit one that has been spent in what he calls the "strike zone" of St. Louis. He's a Mattoon, Illinois, native who lives in New York and just co-wrote the New York magazine cover story/open letter to LeBron James pleading for him to sign with the Knicks. In the world of sportswriting, Leitch is one of the cool kids, evident by the adoration those in line have for him.

"Thanks, bud," he says to an Auburn, Illinois, native, after talking with him for a few minutes about being in awe of St. Louis as a kid.

"When I was a kid, being in St. Louis was like, 'I AM ON MARS,'" he says, doing a sitting-down dance that makes him look more like a Martian than an astronaut.

Leitch is now almost two years removed from overseeing the popular sports blog Deadspin, a site that champions its lack of locker-room access that sports reporters get. It favors stories that highlight what makes blogs gain such loyal followings: videos and witty, often hilarious commentary about that fan who ran on the field in Philadelphia, only to get Tased by security; scathing commentary about the creep who videotaped ESPN personality/goddess Erin Andrews in her hotel room; and of course, Tiger Woods. Leitch was a founding editor of the Gawker Media blog, which launched in September 2005.

These days Deadspin is focused more on pageviews and ad impressions than when Leitch oversaw it. And its current editor, A.J. Daulerio sits in on advertising and business meetings -- a side of the business Leitch never dealt with. Deadspin was like "found money" to the business people at Gawker, he says of its skyrocket to success.

"The same way that I don't look at the Amazon number now, I never had to look at pageviews then," Leitch says. "The thing that helped with Deadspin is that Gawker never thought that was going to work. Like, they just did it on a whim. Because of that, they saw everything good that came from Deadspin as a happy accident."

Leitch is quick to note that he's not the best person to run Deadspin now. He uses the Tiger Woods scandal as an example.

"I shudder to think of how I would have covered the Tiger Woods story," he says. "A.J. covered the shit out that, the way now, today, Deadspin should cover that story. I'm certain that [Nick Denton, founder and proprietor of Gawker Media, the parent company of ten different web blogs] would've looked at my story and said, 'You are losing every pageview. You made one pun about some porn movie you saw in 1984, and then you dropped the story because it made you feel icky.' That couldn't be what Deadspin is now. Deadspin has to follow stories like that. Leaving at the time that I did was probably a good idea."

On Thursday night, Leitch sat next to St. Louis Post-Dispatch columnist Bernie Miklasz at Left Bank, talking about Are We Winning? the Cubs and whether Mizzou should be in the Big Ten conference, drinking white wine all the while. Are We Winning?'s primary narrative centers on Leitch, his father, Bryan, and a friend who was a Cubs fan, going to Wrigley Field. Although Bryan Leitch, who was at Left Bank on Thursday, has lived 200 miles from Wrigley his entire life, he had never made the trip. Instead, he and son would make the hour-and-45-minute drive to Busch Stadium from Mattoon, sometimes drinking a few Natural Lights on the way. In the book and on Thursday night, Leitch talked about the community of Cardinals fans at Busch Stadium; that they, more so than the people who run the ballclub, constitute the franchise.

"I guarantee you I have high-fived some very morally abhorrent people in my time," Leitch jokes. "To me it doesn't matter. When you're [at a baseball game] and you're part of that, it's a really exciting thing."

When he's through signing books, Leitch's bangs and sideburns are sweaty from chatting it up with admirers. Still, he seems far from exhausted, despite having woken up at 5 a.m. after closing down the hotel bar at the Drury Inn with his parents the night before.

Later Thursday morning, he went on-air on the The McGraw Show on KTRS-AM (550 AM) with his dad, a longtime Milhaven listener. (Today, Friday, Leitch appeared on KMOX's Charlie Brennan show, receiving praise from Cardinals skipper Tony La Russa and sportswriter Buzz Bissinger, with whom Leitch sparred with over the issue of sports writing vs. blogging, in a now infamous Costas Now episode on HBO.)

Also on Thursday, Leitch was interviewed in the Cardinals dugout on Fox Sports Midwest during a pregame chat with Jim Hayes, highlighted by an unfortunate choice of eyewear -- he was ripped as an "old lesbian" on Deadspin later that day. Then it was onto Left Bank for the two-hour book chat.

After leaving Left Bank, Leitch moves on to Par, the golf-centric bar in the old Hi-Pointe space, with Miklasz, Post-Dispatch Cardinals writer Derrick Goold and Joe Sports Fan blogger Matt Sebek. It wasn't an exclusive affair by any means -- in fact, he invited a few Left Bank customers along for beers.

He says he'll be up around 7 a.m. Friday. "If I don't get up and start writing something, I start to get itchy."

Leitch's next tour stop is in the less-than-friendly confines of Chicago, homebase of sports columnist and frequent Deadspin target Jay Mariotti.