Saturday, May 1, saw the first of four planned Open Streets events in St. Louis. The project, founded in Bogota, Colombia, closes major thoroughfares to automobile traffic in an effort to encourage pedestrian use. In St. Louis, that meant shutting down Lindell Boulevard from just east of Kingshighway to Grand Boulevard and Locust Street from Grand to North 8th Street.

"It was a success," says Helen Yane, an administrative assistant to Mayor Slay who is in change of coordinating Open Streets. "Although there's definitely room for improvement. We had limited time to get the word out.

"That's the biggest comment from participants: Other people hadn't heard about it. That being said, we had about 1,500 people that showed up."

The biggest surprise to Yane was the number of participants on bikes: "I thought more people would be walking and skating. The majority of them -- 95% were on bicycles."

Still, Yane acknowledges that some businesses and churches were upset by the street closures: 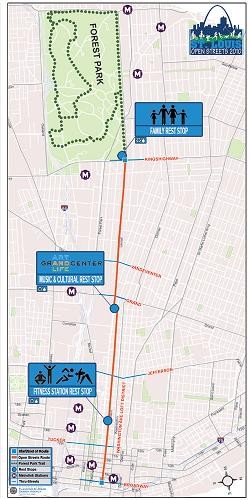 Steven Becker of Nadoz Euro Bakery & Café inside the Coronado at 3701 Lindell was among those frustrated.

"It wasn't a good thing," says Becker, noting that several of his customers who tried to drive to Nadoz for brunch during the event simply turned back around. "It hurt our business."

Becker thinks the premise was flawed. "The whole premise was closed streets. It works where people live. As you get closer down here to midtown, it's not a good idea. There's no one living here. The SLU students don't even wake up till 1 p.m. [when the event ended]."

"It wasn't promoted at all," adds Becker, who says he saw no one participating except employees of Boeing, the event's sponsor, on bicycles. "They whizzed by [my restaurant]. They whizzed back the other way."

Harman Moseley, manager of the Moolah Theatre and Chase Park Plaza Cinemas says the event didn't hurt his business: "The fact that they've got [Open Streets] from 8:30 [p.m.] to 12:30 [p.m.], it's not that big of an impact.

"That's not a busy time at the Moolah. If it were all day, that would be devastating."

Adds Moseley, "We don't have mountains. We don't have oceans. People are starved for that kind of interaction. From a community standpoint, [Open Streets] is a terrific idea."

The second Open Streets event will be held on Sunday, June 13. Sensitive to the concerns of business owners, Yane says the route will be adjusted to pass through the more residential area of the Central West End. She hopes to double the number of participants from the first event.

Two more events are planned for this year: Sunday, September 19, and Saturday, October 9.