It's a Chinese Eat Dog World Out There 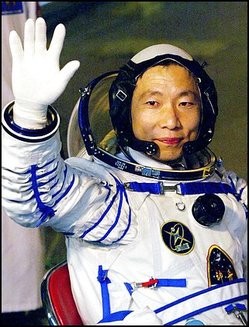 The Daily RFT has spilt considerable electronic ink of late chronicling the exploits of Columbia cops who turned their guns loose on aggressive dogs. Then there was the sorry tale of the Bellefontaine Neighbors officer who dispensed a deadly round from his department-issued .40-caliber Glock, killing a two-year-old terrier mix -- right in front of a horrified little girl.

Now we turn our attention to another dog story, this one concerning the Chinese astronaut who has revealed in his autobiography that he and other Chinese space voyagers routinely chowed down on dog meat while hurtling around the earth.

Wonder if they brought doggie bags with them.

As the London Telegraph reports: "Many of my friends," wrote Yang Liwei, "are curious about what we eat [in space] and think that astronauts must have some expensive delicacies, like shark's fin or abalone. Actually, we ate quite normal food, there is no need to keep it a secret."

The 44-year-old military pilot, who commanded the Shenzhou Five mission in 2003, listed a menu that included braised chicken, steamed fish -- and dog meat from Huajiang County in the Guangdong province. The meat is famous throughout China for its nutritional benefits.

In fact, there's a local proverb in the south of China that says "Huajiang dog is better for you than ginseng."

Liwei said astronauts eat the dog meat to keep up their strength as the whirl through space.

Say what you want about the police in Columbia, but they don't dine on dogs. No, they shoot 'em.