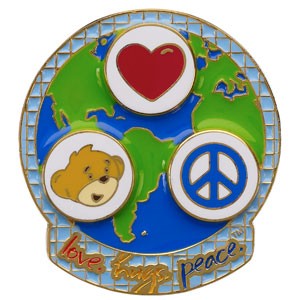 The California-based advocacy group Center for Environmental Health says a children's accessory manufactured by St. Louis-based Build-A-Bear could be, uhm, beary, beary dangerous for the kiddies.

The"Collectibear Pin" (pictured here) has 10 times the federal limit for lead in children's toys, according to the CEH.

Build-A-Bear refutes that claim. In an article in today's Post-Dispatch the toy company says that the pin in question passed "rigorous testing" last year.

This isn't the first time CEH has leveled charges at Build-A-Bear.

In 2008 the agency sued Build-A-Bear over claims that a dog collar charm manufactured by the company contained dangerously high levels of lead and other carcinogens.