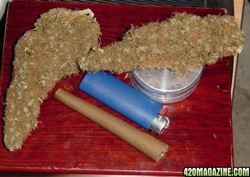 That's how much mary jane an East St. Louis drug dealer moved over five years, from 2002 to 2007. The Belleville News-Democrat reports Ivory Manuel, 42, of East St. Louis was sentenced on Friday to eleven years in prison for moving the dope, which has a "street value" of more than $25 million. Manuel pleaded guilty to an indictment "charging him with conspiracy to distribute and possess with intent to distribute marijuana" back October 27 (view U.S. Attorney's Office press release here.)