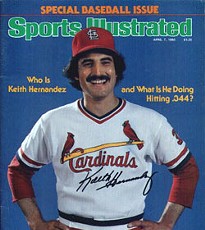 Check this video of former Cardinals great Keith Hernandez (1979-1983), now a broadcaster for the New York Mets, caught sleeping on camera during an extra-inning affair in New York when the San Francisco Giants were in town on Saturday night.

You almost feel bad for the guy.

One really can't blame Hernandez, who said he didn't get much sleep the night before, as the three-hour, 32-minute game finally ended in the eleventh inning, thanks to a home run by Mets catcher Henry Blanco.

If Hernandez managed to stay awake during the Mets' 20-inning game against the Cardinals back in April, he shouldn't get too much flack for nodding off Saturday, right?