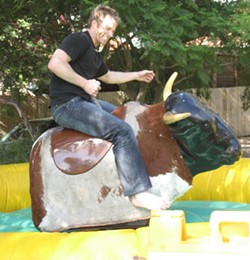 It's been nearly four years since Timothy Cavins of Granite City climbed atop a mechanical bull at a picnic and, well, it didn't end well.

According to a lawsuit filed two years ago, Cavins injured his hand on the bull -- an injury that eventually led to surgery and the amputation of a finger. Cavins claims in his lawsuit that the operator of the bull, Fun Source Inc., didn't properly instruct him how to ride the the bull.

Fun Source has never responded to the lawsuit and now Cavins is saying to himself "enough of this this bull****!" He's asking the judge for a default judgment.

So how much does Cavins want for his missing finger and two-plus years of legal headaches? $50k.

As with any story on mechanical bulls, we're contractually obligated to show the following video clip...