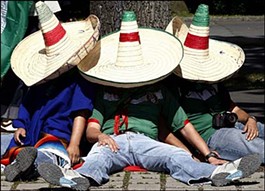 On the eve of their summer recess, the Illinois House of Representatives boldly passed a resolution that officially condemns Arizona's harsh new immigration law.

Trouble was, they ended up taking the legislative equivalent of a siesta to do it.

Owing to strong Republican resistance, debate on the Arizona resolution lasted about half an hour. That was 29 minutes too long for the many observers who felt that the lawmakers should have spent their time discussing more pressing matters that might actually affect their constituents like, oh, allowing the construction of new nuclear power plants, a program to legalize medical marijuana for people with "debilitating conditions," raising the speed limit on state highways to 70 mph, and....wait for it...the state's $13 billion budget deficit.

None of those issues (all of which have bills pending) were resolved and now the lawmakers will be working overtime.

Kevin McDermott of the Post-Dispatch reported on last week's proceedings:


What the Legislature didn't get around to, before blowing Friday's deadline, was to approve a new state budget. Or agree on whether to hike the state's cigarette taxes, or allow slot machines at horse tracks, or let a Swansea developer use state tax money to build a commercial development at Marion. Or a slew of other measures that are still pending in one chamber or the other.

"As you know, our business is not finished," House Speaker Michael Madigan, D-Chicago, told legislators before he sent them home for the weekend, with instructions to keep their phones nearby. "When we are prepared to finish our business, we will come back to Springfield for one or two days, hopefully no more.

Madigan and others weren't saying when that would be, but it will likely be within the next few weeks.

Illinois' budget year starts July 1, and the Legislature (controlled by Democrats) generally passes the new budget before the end of May. If they go past May 31, budget approval requires a three-fifths vote instead of a simple majority.

As McDermott notes, other items left on the table include a proposal to allow slot machines at horse tracks like Fairmount Park, a $1 sin tax on cigarettes to raise funds for education, and a a six-week amnesty period for people who forgot to pay their taxes.

Perhaps the Illinois House should let White Sox manager Ozzie Guillen take care of their tongue-lashing business until they're finished solving the state's other problems.