In anticipation of street construction downtown scheduled to start next week, the city served eviction notices this morning to the homeless people of "Hopeville," a tent city in an abandoned railway tunnel beneath Tucker Boulevard. 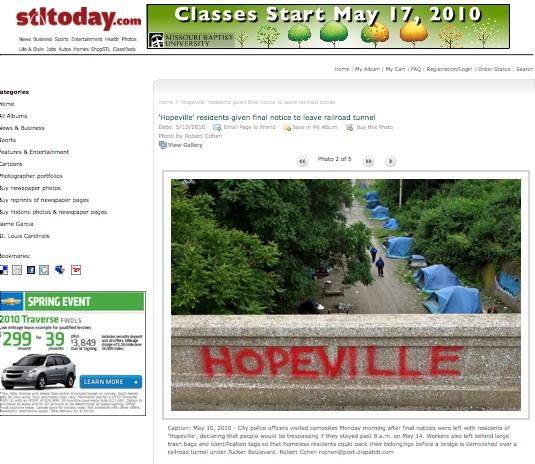 The city plans to start rebuilding Tucker from Washington Avenue to Cole Street, starting next Monday. The $34 million construction plan requires that the tunnel beneath Tucker be sealed up. All the squatters in Hopeville, which, at times, has been as large as 65 tents, have to move by 8 a.m. this Friday, May 14. Those who don't leave may be arrested.

Reverend Larry Rice, who has been providing supplies and equipment to many of the tunnel residents, has been pressuring the city to set aside an acre of land for them to move to. But, reports the Post-Dispatch,

city officials and social service agencies have accused him of aggravating the situation and exploiting homeless people by drawing more of them to the Tucker tunnel.

Bill Siedhoff, director of the city's department of heath and human services, told the Post-Dispatch he wants everyone to leave peacefully. The city has offered to help the residents find beds in homeless shelters.

"They are trespassing right now as we speak and they need to leave that area," he said. "We don't want to arrest anyone, but if push comes to shove, and we are forced into a situation like that, those are the measures we will take. We've tried to be as reasonable as we can."

Some of the tunnel-dwellers have already made plans to move closer to the water, where they can fish for food.